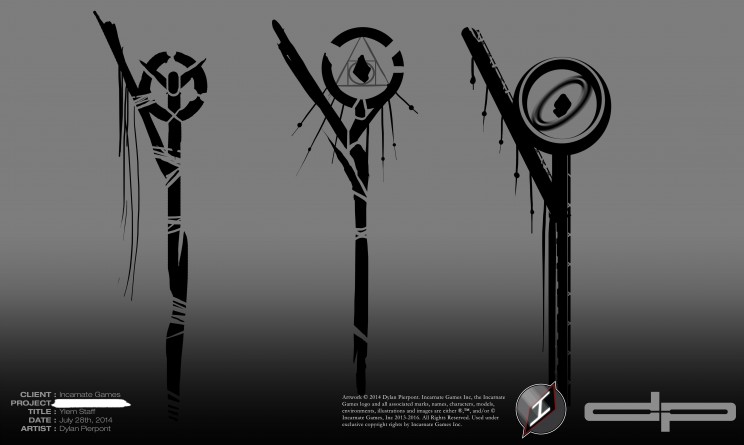 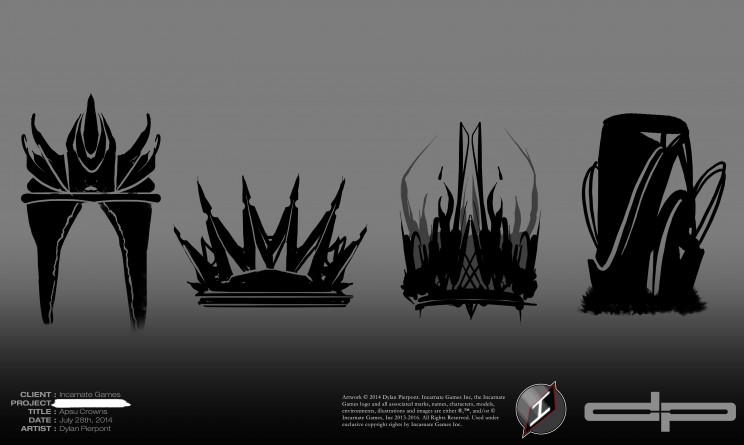 This episode shows in a gallery the silhouette concepts for High King Apsu’s Ylem Staff and possible crowns. There was a large amount of discussion posts for these, most of which consisted of Jason elaborating on his choices for Apsu. Since Apsu is a highly significant factor in the project, we wanted to make sure everything was covered.

So without further ado, here were those comments:

Jason Allen
Ok. So I’ve thought all of this through, and the only way I think that I can convey this information effectively is by posting several times.This first posts are going to cover the final confirmation for the crown and staff design.The crown was a tough choice, but I’ve been focusing on the #3 concept from the Apsu Crowns image for awhile now. I even made a comp with the central Apsu wearing that crown you can see in the attached image. Today though some really great realizations took place, and I’m making the final choice to be the said #3 from the Apsu Crowns concept image. Forgive me for putting you through this, but I really want to share my line of reasoning for this one.The reason is related to the philosophers stone symbolism. We have all seen the typical depiction of the philosopher’s stone symbol:

However, there is an earlier and more sophisticated depiction of this symbol. There are several alchemical illustrations that adhere to this pattern. I had remembered seeing it depicted and read about it before, but today for some reason it really stood out:

The significance of the geometry of this design is a long story, and you can read more about it here if you wish:
http://members.ozemail.com.au/~clauspat/stonea.htm
But the most glaring significance to this symbol as it pertains to Apsu is this: in the front of crown number 3, we can see that the triangle in the front of this crown has a very powerful resemblance to the upper half of the philosopher’s stone symbol, representing the spiritual world. I would like for us to make the proper adjustment to the geometry of this triangle in the crown to match the angles of the classical symbol as best we can.Which brings me to part 2. I think it would be even more awesome then, if we had a gemstone of Ylem socketed into this space giving Apsu’s diadem an undeniably distinctive look. See attached image.Which brings me to the staff! And, ironically, there are some more symbolic finds! I spent a good portion of my afternoon preparing this next one.I will post the images and information regarding the staff in the next post.