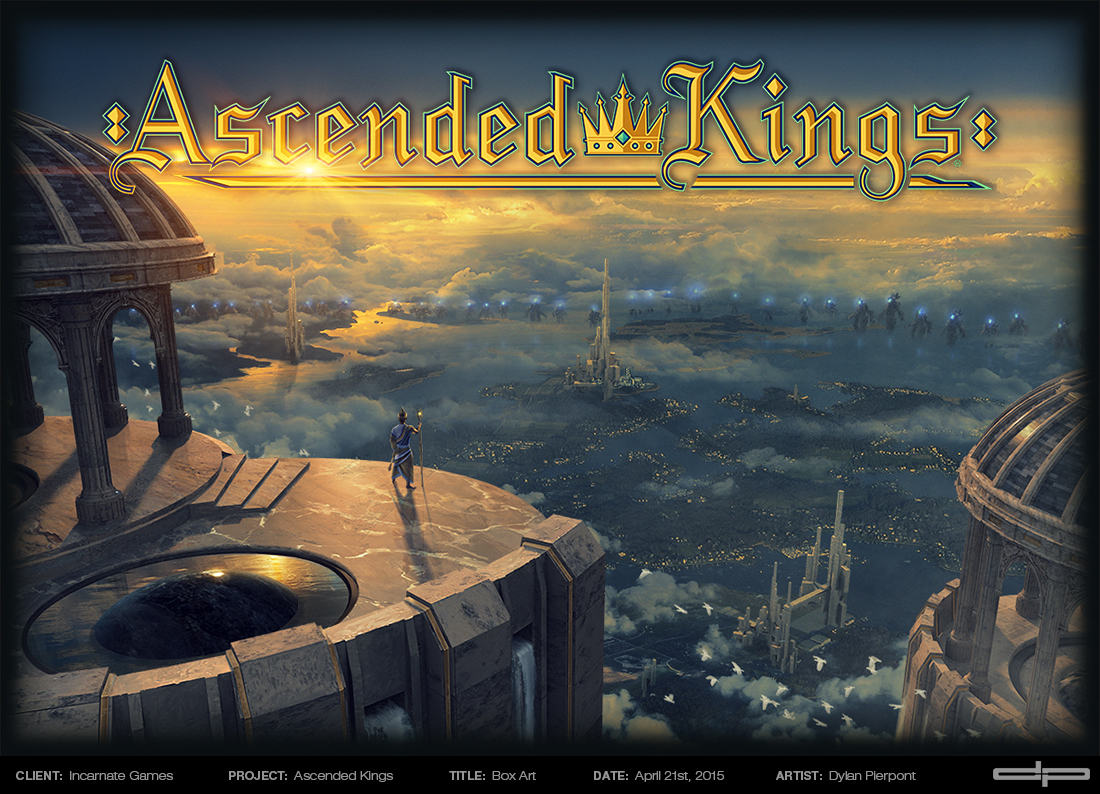 So Here we are. Final cover art and a few mockups 🙂

Really happy with how this one turned out and I’m thrilled you guys chose to go with a custom piece for the box art. I think that’s going to speak volumes about the quality and presentation that AK demands. I have some cleaning up to do with my .psd layers since it’s going to be used for the parallax website effect. But let me know if you have any other feedback.

I experimented with 3 different backgrounds on the side walls which you can see in the Wall Styles_sm.jpg file. I personally prefer #1 as the marble material mimicks the marble we have on the cover. I also think it’s going to help bring unity to the box as a whole rather than have 4 completely separate textures on all 4 sides. But let me hear your thoughts on this.

For the box art mock ups I did two versions. One with a dark vignette treatment and another with the blue of the sky like you suggested Anthony. At the moment I think I prefer the darker fade because you’ll notice with the lighter one, on the front cover there are darker values on the left dome. And so IMO the lighter fade looks odd to me when it butts up against the darker interior. Looks great in the sky up top but not so much on the other three sides.

You’ll also notice on the mockups there’s a trim around each side wall. That’s just the .5″ bleed frame I gave for each panel, but when I threw them in the mockup I thought it looked kind of interesting. Certainly nothing we have to keep but I thought it was worth mentioning.

I think that about covers it. Let me know what your thoughts are! I’m excited to hand these off to Tony soon and see what we got!

Dude I’m really freaking out at how awesome this is, you’ll have to give me a day to respond in a manner deserving of this post you threw down today! My jaw might be off the floor by then…

This is a really great illustration to look at and get lost in. This final scene brings intensity in the forms of fear, vertigo and intrigue all at the same time and I absolutely love it. Seeing the Sentinels coming towards the land through the ocean like this is really bad ass. The level of detail in the buildings is awesome and Apsu standing there looking across the entire scene is totally boss. I’m happy with the design choices for the buildings and I’m very happy with all these final elements and effects that you put into this. Really great work man, this is phenomenal.There are very few things to comment on in terms of touch up for the illustration itself as far as my opinion goes:

Really the only thing that I think the image could benefit the most from is if we take a look at the sentinels that are on the right side that are standing in the open. As soon as the identical sentinel copies of each other becomes noticeable I think that it takes a little bit away from the immersion. I’d like the thought of “Oh look, these two are exact copies of each other” to be avoided if it is possible.

The only other thing (which isn’t as big of a deal) is that *technically* the viewer must assume that this is overlooking the ocean because there is no clear space in the clouds which really reveals that there is no more land out there. Don’t get me wrong, its actually pretty obvious that there is an ocean under all those clouds. I am actually ok with keeping the clouds the way you have them now if you think it should stay this way but I do have one suggestion which may help –

If you look at the attached image I ORANGE highlighted an area of land that I wouldn’t be opposed to having you remove completely. (But perhaps even the GREEN highlighted area too underneath the sentinels, please let me know what you think) I think it would do a few things, let me know your thoughts: It would help us take advantage of seeing more of those cool reflections of the sentinel lights in the water if the land weren’t there. It would also give us more water to look at selling that its an ocean, and it would by proxy set that closest city smack right on the coast line which I think would be neat.

As far as the border fade and side walls:

I agree with you I think the darker version looks best, and I also prefer the marble tiles it really fits well so we’ll keep that. But I do have one question regarding the overlap of the inner border over the kings. What where to happen if we had that border actually going behind each of the kings allowing them to stand out a bit more? See attached image.

This is so freaking awesome dude! This fits so great with the story! I’m glad we did this custom box art!

Really fresh! Great job Dylan!I would suggest that the darker vignette does work better, but that it’s a little abrupt. I think that if the innermost edges of it were more transparent that would solve the problem, and create a smoother transition.

As far as the marble, I agree it’s working the best, but on the subject of your suggestion of creating a dark border around each side, I would say allow me to add those elements if needed when I complete the full box design.

Hey guys! Thanks much for the kind words! Stoked that you’re both diggin’ the work. Can’t wait to see it with final logo and border treatments. And on the future website!@ Jason: No problem. I see what you’re saying about the Sentinel copies. Definitely overlooked that detail. Good eye. I’ll be sure to address that along with the waterline tomorrow. I agree wholeheartedly on both accounts.

@ Anthony: I’ll definitely see what I can do about the fade on that vignette and try to smooth it out. I just want to be sure that when it hits the edge of the box it’s a seamless transition into the side wall. I’ll give it another pass on this final draft and you can let me know your thoughts. If it’s going to be easier for the group I can leave out the fade entirely when I send you the final and you can hit it along with the border, walls, and corner details.

And for the side wall border, absolutely! That’s all your department sir! Just throwing the idea out there. Do with it what you will 😉

Also, Jason, because you guys have the dimensions for the box already, I assume you have an idea as to who the manufacturer will be? Typically the manufacturer would offer a template that Tony could start using to piece together the final design. But if that’s not the case then I’ll refer to you, Tony, on how you think we should best proceed with the final build.

Thanks again guys. Will update the final tomorrow.

Also, just a heads up. I’m getting my upper wisdom teeth out on Tuesday so I’m going to laid up for most of next week. Jason let me know when you want to get the papers started for the Dlone environment which should be next up on our list.

This all sounds good. Looking forward to the update.I’ll get the documents made up for the environments tomorrow. I’ll probably call you to refresh my memory on that conversation we had on those. We will probably do another hangout once we get rolling on the environments to make sure we are considering the player mats holistically (as there will be graphic design elements laying on the image).

Oh, but regarding your manufacturing question, yes. I am pretty sure we are going to be using <removed> who has supplied me with a quote and I am working things out with them. The final dimensions on the box are <values changed>. You’ll notice this isn’t the exact <> that I told you, but I believe that they do this to compensate for a game board that is exactly 16 inches (if the box was exactly 16 inches it would be quite a battle to get the board in and out of there). That extra bit of size gives the board some leeway.I just emailed my contact at Panda asking them to supply us with their templates, I’ll shoot them off to you guys as soon as I have them.