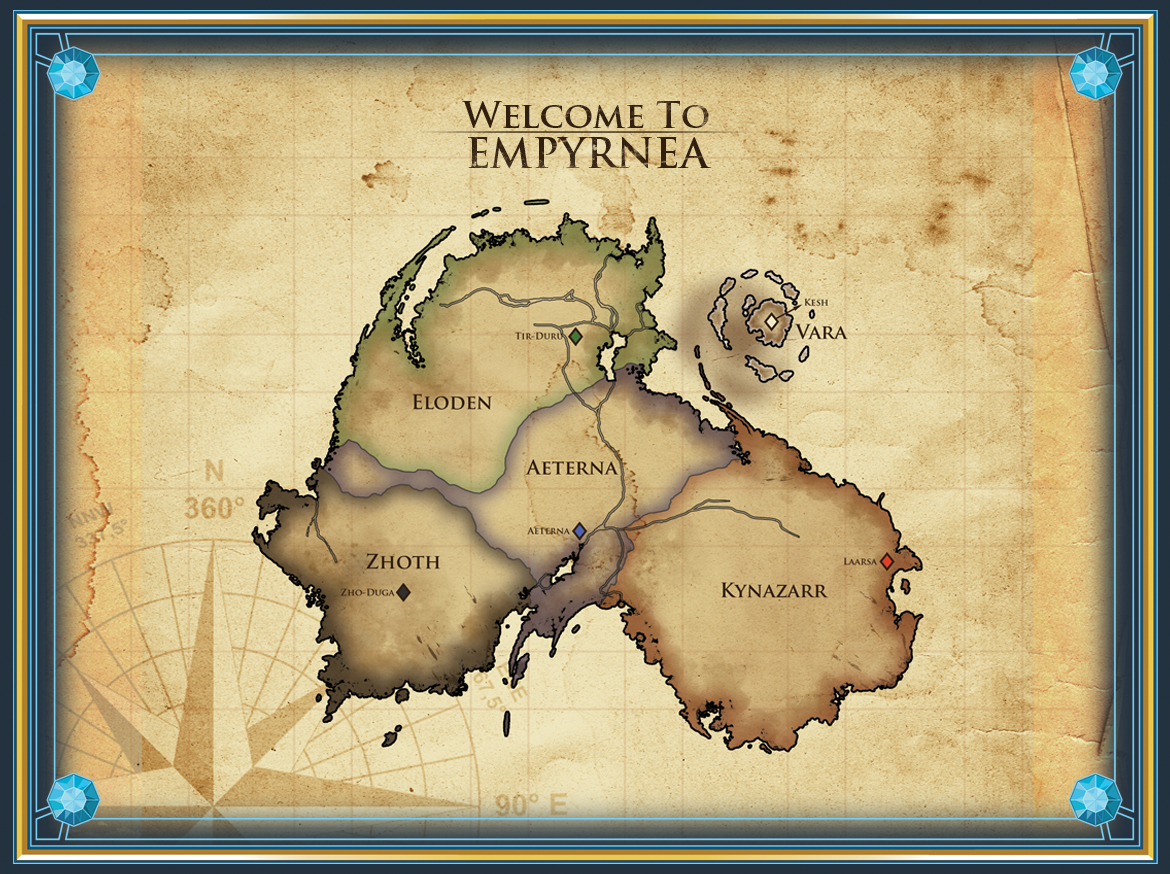 During the age of the Babylonians, a mysterious continent existed far off the coast of Japan, in the middle of the Pacific Ocean. Few knew of its existence and those who did, dare not travel to it, for rumors spoke of strange beasts and natives of unnatural sorcery. Those hapless souls who came upon Empyrnea by chance, or those foolish enough to seek it on their own accord, were never seen again.

With no written record of the land’s location, the continent’s existence passed orally among seamen and travelers. Empyrnea soon became a tale of tradition… One that always ended with a stern warning; Empyrnea was cursed by the gods and to be avoided at all costs. In time, the men who spoke of the mysterious land would be branded fools and lunatics, as the entire continent of Empyrnea vanished from the face of the Earth in 475BC.

For it was at this time, that a stranger to Empyrnea—a traveler of the globe and a master alchemist with great power named Apsu—did what no mortal had ever accomplished before in recorded history. Apsu performed a ritual magic using four incredibly powerful bloodstones and ascended the entire continent of Empyrnea.

The land and all its inhabitants shifted from the physical realm of Earth (known as Corpus Mundus), to a spiritual plane of existence referred to as Pneuma Mundus. It was here, in this new dimension of time and space, that the continent Empyrnea found itself surrounded on all sides by endless ocean and more miraculously, its people found themselves infused with the energy of Ylem; an underlying energy that formed the very fabric of reality.

This infusion of Ylem energy gave the people of Empyrnea new affinities, abilities and insights into things they did not fully comprehend. The frightened masses turned to the great alchemist Apsu to guide them. And so he did. Apsu revealed to the people the concept of the foci. Four main manifestations of the prevailing Ylem energy that now permeated everything around them, and within them.

Taking this knowledge, the people of Empyrnea divided into four main kingdoms each reflective of the Ylem energy bound to them. At the center of all Empyrnea, Apsu built the great Capital City Aeterna. From here, bound to the Ylem energy itself, the force that gives power to all other foci, Apsu reigned as High King of the land.

As the kingdoms formed around Aeterna, Apsu gifted to each one of his four bloodstones. To the wild lands of Eloden, Apsu gave his bloodstone to Shar-Nasir, a fearsome warrior bound to the focus of Egis; the form of Ylem energy that permeates nature.

To the wasteland people of Zhoth, Apsu gave his bloodstone to Khadrius Zhoth, an insightful wanderer with no tribe to call his own, bound to the focus of Dire; the form of Ylem energy associated with destruction.

To the great floating plateaus of Vara, Apsu gave his bloodstone to Kariis Vara, the leader of their high church, bound to the focus of Aria; the form of Ylem energy responsible for creation.

Among all the influential inhabitants of Empyrnea’s kingdoms, only one questioned Apsu and his motives, Kalea Kynazarr. The Queen of Kynazarr—the largest most civilized city of Empyrnea—called for a high council to rule from the capital city Aeterna, not a single ruler such as Apsu. The queen’s proposal fell on deaf ears and it came as quite a shock when Apsu gifted his last bloodstone to his only voice of opposition… Kalea Kynazarr, bound to the focus of Pyre; the form of Ylem energy associated with willpower.

The gift of the bloodstones granted the kings and queen immortality. As long as the stones resided on their body and their heads remain attached to their necks, death would be unknown to them for all time.

Over the next fifteen centuries, under the reign of the bloodstone kings, the people of Empyrnea flourished.

But all was not well.

Contrary to first assumptions, the dimension of Pneuma Mundus was not uninhabited. Massive rock creatures known as Sentinels appeared in Empyrnea’s surrounding ocean. And they were highly aggressive. Their attacks came few and far between at first, but as the centuries wore on and Empyrnea grew, so did their frequency… and size.

Only the Magi, masters of all four foci, selected by Apsu and his Ylem Clergy, stood against the sentinels. For a time their power and effort held. The Magi cast back the largest sentinel assault during the great Ten Day Sentinel War. But as with all things, nothing lasts forever. And in the year 1545, the Magi’s protection finally yielded and life in Empyrnea changed for evermore.

For on this year, the largest sentinel ever recorded, a massive monstrosity as big as a small mountain appeared in the sea and threatened to attack the Capital City. With the Magi powerless to stand against such a beast, Apsu himself moved to defend Aeterna. And while the High King successfully destroyed the sentinel, he did so paying the ultimate price.

The death of the High King shook Empyrnea to its very core.

Three years later, Empyrnea is in chaos. The Magi have all but vanished. The power of the four king’s bloodstones has evaporated. While the great kings are forced to come face to face with their restored mortality, a sickness spreads across the land ending it for many. The disease is known as the Affliction. People who become afflicted, become mad—prone to violence and worst of all, die far before their time. Never before has ascended Empyrnea seen such death and violence. As the inhabitants of the four kingdoms struggle to survive, Apsu’s Ylem Clergy form the council known as the Enclave and usher forth a new generation of Magi. But unlike the original Magi who brought order and harmony and helped nourish the people of Empyrnea, the new order only exists to enforce the Enclave’s doctrine… and they do so at any cost.

New churches of Ylem have sprung up throughout Empyrnea and the new Magi assure the masses attend under threat of violence and imprisonment. Without the help of the original Magi—the Pariah as they’ve come to be known—the people are helpless. The commoners’ resistance breaks time and time again against the Enclave’s Magi enforcers.

With each passing day the affliction sweeps across the land leaving violence and death in its wake. And while the kingdoms deal with a crumbling society, more and more sentinels appear off the coast. They arrive in such number, as to put the great Ten Day Sentinel War to shame. Empyrnea’s utter annihilation is at hand and the people sense their impending doom.

The only hope for Empyrnea lies in the four kings and their ability to restore power to their magical bloodstones. Out of the public eye, the Enclave has summoned forth the four kings and revealed to them, the power of their stones may be returned only by blood.

The kings of Empyrnea have been set with an ultimatum—face each other in combat to the death or let Empyrnea and all they hold dear, fall. While Empyrnea struggles to maintain its last remnants of civilization, the four kings of Empyrnea take to the arena… prepared to decide the fate of all on the outcome of a single battle.