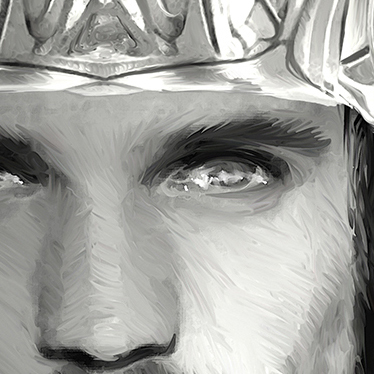 Welcome to a Special Preview Episode of the Incarnate Process!

Another preview features a glimpse of the Ascended Kings Lore Book entitled “The Pocket Guide to Empyrnea” written by Nick Macari and illustrated by Elizabeth Leggett.

Today’s post we feature High King Apsu, one of the Ascended Kings of Empyrnea, who appears in the lore and story of Ascended Kings, the upcoming tabletop game and graphic novel by Incarnate Games.

Here is an excerpt of the Pocket Guide which accompanies this beautiful illustration:

Using the power of the Philosopher’s Stone Apsu breached the dimensional barriers and ascended himself (and surprisingly, all of Empyrnea) to a spiritual realm saturated with powerful Ylem energy.

The culmination of a lifetime’s worth of research and study, Apsu’s arrival in Pneuma Mundus was not the end of his journey, but merely another step toward his goal of absolute power and knowledge.

Once in the ascended realm, the alchemist’s studies only intensified. His insatiable appetite to understand Ylem and his new home, unlocked secrets never before known to human minds… and at an unprecedented pace.

We will be sending out bi-weekly newsletters leading up to the relaunch of the Ascended Kings Kickstarter on 7-5-17. Inside you will discover never before seen content, including the full illustration of High King Apsu, featured here, and much more to come!

We hope you enjoyed this special preview, stay tuned for next week as we share another character from The Pocket Guide to Empyrnea!